What happened to the shades of gray?
The Martin Trial: If Trayvon, in fact, Killed Zimmerman 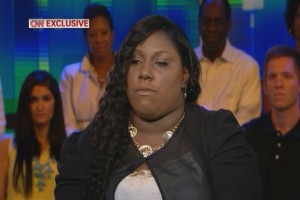 Rachel Jeantel, the first witness for the prosecution in the George Zimmerman case, was on Piers Morgan last night, and I caught a brief glimpse. She was obviously – and understandably – furious at the defense attorney, Don West.

The fact of the matter is that West did his job of trying to eviscerate her testimony, making her look untrustworthy. And, he did his job well.

However, Rachel said something very striking, yesterday, that Piers Morgan didn’t follow up on.

After detailing that Rachel had earlier in the day caught a glimpse of Don West because he was near the same television studio, Piers asked her something to the effect of “How did you contain yourself when you saw him?”

Suddenly, you could hear her audibly kick against the bottom of the interview table, shuffle in her seat, and begin fuming. But, she quickly contained herself.

It was right then that I thought: I so wish that Trayvon Martin acted like a Christian. If he didn’t lash out at the stalker but simply continued to the home that was waiting for him, he’d be alive today. And, I so wish George Zimmerman acted like a Christian. If he trusted the authorities, but most importantly God, he would not have chosen to take the law into his own hands and end up mistakenly shooting and killing an unarmed teenager because of his unChristian fear that property would be stolen.

What happened to the shades of gray?
The Martin Trial: If Trayvon, in fact, Killed Zimmerman