No Jewish Evangelism? Or, Why “Real” Jews do not try and convert others

A friend recently posted her frustration at a Messianic Jew who issued a press release announcing that his son was missing. She viewed this as “disgusting” and as an attempt to proselytize to Jewish people, adding: “Real Jews do not try to convert others. Messianics are a different story. They aren’t Jews, but they still have some Jewish guilt, so they are afraid to say they are Christians.” 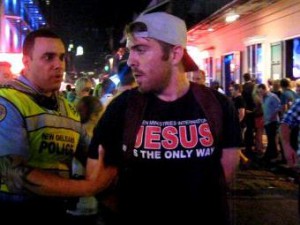 I submit that the reason that Jews don’t proselytize is because they are not encouraged to in the Old Covenant! The Chosen People are not told to invite others in within the Old Testament.

It is a source of great frustration when, like here, I am reminded of how Christian proselytizing is so negatively viewed by many non-believers. Granted, when we Christians go into places where we are not wanted, we are inviting criticism. Still, I pray that folks like my friend, above, can see past our failures as Christians and realize what evangelism is all about.

And, the greatest thing about it all (particularly how it relates to my Jewish friends and Gentile friends)? It is only in Christ where BOTH Jew and Gentile are reconciled! It is Old Testament Jewish dogma that says that only Jews are the Chosen people, but it is New Testament Jewish (yes, it is Jewish) dogma that says that Gentiles, too, can be sons and daughters of God.

So, perhaps the saddest part of this for me is seeing my friends and neighbors who are blind to the love behind Christian proselytizing because although we are called solely to point the finger to the one place where a relationship with God is not an exclusive, members-only country club, we so often fail. The message is and always has been: It is in Christianity where a relationship with God is an open door for ALL!

During this Christmas season, my prayer is that a few more of my non-believing friends can see past the world’s rhetoric and past our failures as Christians and, instead, see the real purpose… and subsequently, the reality of God’s will for all of His creation. In Jesus’ Name!

Ephesians 2:11 Therefore, remember that formerly you who are Gentiles by birth and called “uncircumcised” by those who call themselves “the circumcision” (which is done in the body by human hands)— 12 remember that at that time you were separate from Christ, excluded from citizenship in Israel and foreigners to the covenants of the promise, without hope and without God in the world. 13 But now in Christ Jesus you who once were far away have been brought near by the blood of Christ.

14 For he himself is our peace, who has made the two groups one and has destroyed the barrier, the dividing wall of hostility, 15 by setting aside in his flesh the law with its commands and regulations. His purpose was to create in himself one new humanity out of the two, thus making peace, 16 and in one body to reconcile both of them to God through the cross, by which he put to death their hostility. 17 He came and preached peace to you who were far away and peace to those who were near. 18 For through him we both have access to the Father by one Spirit.