"Rob is a lawyer. Maybe he should think about singing his opening arguments." - Carlos Whittaker, Blogger and Christian Musician

Join me in support of my music ministry by adding yourself to my street team! Help me to spread the Gospel through music!

SOME OF MY FAVORITE SCRIPTURE

There’s a scene in the great action movie “Die Hard With A Vengeance” where our hero John McClane is forced to wear an “I Hate N*ggers” sign around his body, in the middle of Harlem, so as to prevent massive casualties via a bomb set to explode somewhere in New York City.

The director didn’t need to do much by way of creating dramatic tension. We, the viewers, knew that this was bad news.

Yet, so many of us Christians volunteer to do the same thing, where we enter into a place for the purpose of spreading the Gospel, knowing of a high likelihood of confrontation with those expected to be present in that place. The difference between us and John McClane, however, is that in our case, there isn’t a terrorist hiding somewhere in New York City with his finger on a bomb’s trigger.

The video cannot be shown at the moment. Please try again later.

In Matthew 10:14, Jesus told His disciples this, to be considered whenever they went to a location to spread the Gospel:

If anyone will not welcome you or listen to your words, leave that home or town and shake the dust off your feet.

Notice how it doesn’t just say listen to your words…. “If anyone will not welcome you.” I submit that the minute we go into a place knowing full well that we are not welcome, we are sinning.

Before you scratch your head or start yelling loudly at your computer monitors, expressing your disagreement, I have to ask: Why would a Christian want to enter right smack into the middle of a lion’s den, knowing full well that this will lead to nothing good? When we do this, we cause dissension, discord, enmity, and anger. Guess what the Bible says about these things?

Now the works of the flesh are evident: … enmity, strife, jealousy, fits of anger, rivalries, dissensions, divisions, envy… and things like these. I warn you, as I warned you before, that those who do such things will not inherit the kingdom of God. Galatians 5:19-21

You see what I did there? I took away all of the portions that we could apply to homosexuals (the sexual immorality bits) so that we can focus on those bits that apply to us when we voluntarily go into these pride parades (or anywhere else, for that matter) knowing full well that we will create discord (when we have already been there, for instance, and already received a substantial amount of dissension, never helping to bring anyone to the feet of Jesus, but only satisfying our flesh).

Why do I say satisfying the flesh? Who was filming here? Those who were with the folks evangelizing. How many street preachers do we see on YouTube who film their preaching? Granted, you might say that they film because they want evidence to protect themselves in the event that they are attacked. 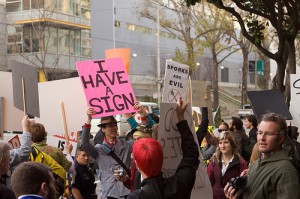 But, this leads me to two thoughts: (1) If you start your evangelism with a camera because you know of a high likelihood of attack/dissension, you are proving foreknowledge of the sin; and (2) why do I see so many videos from street preachers on YouTube that are uploaded when they did not receive physical attack? Satisfaction of the flesh.

For you were called to freedom, brothers. Only do not use your freedom as an opportunity for the flesh, but through love serve one another. Galatians 5:13

I submit that if we really intend on showing Christ’s love to folks like those that attacked these Christians in this video of the Seattle Pride Fest, we should do something loving. How about setting up a chair, sitting silently, and setting up a sign that – rather than saying something like “Repent, gays go to hell!” – instead says: “How can I pray for you?” Or, “Free bottled water.” Or, better yet, “God loves you so much that He died for you. He died for me, too. How about a hug?”

Certainly, I think such a Christian is still, potentially, going to cause another person to stumble, and this is sinful. However, I believe that this is more an expression of the kind of love that God has for all of us… the kind of love God showed to us when He led us to repentance and to His feet. After all, Jesus is our model of conduct, and there is not one time in the Bible that he put pen to papayrus and entered into a lion’s den believing that this would convert people to the Way.